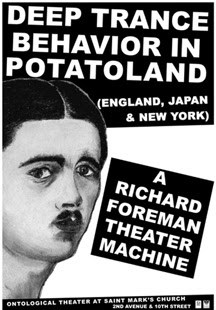 Welcome to the first day of this new blog, dedicated to the artistic process-- and more specifically, rehearsal and preparation towards production and the various events that surround this theater. Over the coming months current Ontological artists (and some from the past), staff, interns and others from the community will post their observations, questions and revelations in response to their experiences here.

Currently the theater is in rehearsal for DEEP TRANCE BEHAVIOR IN POTATOLAND (A RICHARD FOREMAN THEATER MACHINE), opening January 17, 2008. So who better to make the inaugural post, but Mr. Foreman himself? Below is an excerpt from Foreman's notebook on the current show:

NOT ABOUT
Thinking or feeling
BUT
About de-focus
(self-remember?)
savor “WHOLE FIELD”
let it enter

(don’t identify with one
element, which is always DECEIT)


Ah
The temple of
The rift between—

The personality mask, and the empty. . .empty


The dream of the voice so deep that its rumble sounds all possible words, all possible ideas, all at the same time, such multiple universes of sound and sense


“WHAT I GIVE YOU NOW”
What I give you now
Is the key to the echo chamber—
Inside of which discovering the echo of all things inside each single word or sound, and one therefore
Eventually. . . . .

The temple of all people who strive
For continual clarity, with which—


DON’T FINISH SENTENCES
(Beginnings only, like a lightening flash)

Suppose I were to postulate


Let it be that

Suppose it were true—

Were he to go

Should it be true

(contrary to the fact at present)
Ah the true realm
Which this confrontation hides
Rendered unavailable
Through normal rigor
Misapplied, as always

(One does not, perhaps,
copy internally, -- the mental configuration
isomorphic with this
total compositional field.
And yet, it happens
Inside you—now)

Defining the perimeters of this
3 dimensional ideogram—
nothing less than what is touched, mentally
at the moment of non-sustainable
contact


Certain aspects, not yet clarified
One fights impatiently
To fill in such gaps
That might otherwise have led one
Into very real things


To read the full notes click here
Posted by Ontological-Hysteric Theater at 1:47 PM

ineluctable modality of the visible I will die.