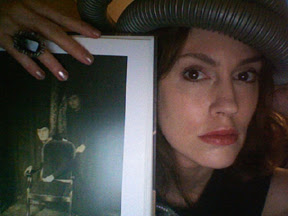 Messing around with Potatoland-like objects at home can be fun: a coil, a spirit photograph; unusual jewelry and an interesting dress.

Notes from a rehearsal:

RICHARD FOREMAN: Is this the fifth week?

STAGE MANAGER: Oh we’re past that-

We did two with you then two w/o you…

STAGE MANAGER: Okay, this is the beginning of the fifth week.

…Actors on break: actress in a black crepe dress sleeping by a giant urn…

RICHARD FOREMAN: Which play had the giant blackbird pie?

STAGE MANAGER: The blackbird pie is in storage upstate.

Break is over – actress on floor wakes up.

VIDEO CLOSE UP: Beautiful girl in a black hat turns her head

A light bulb in the video screen pulses then glows (like a hat pin, a pearl, a mystical navel)

BEAUTIFUL BLACK HAT GIRL ON VIDEO: I AM HIDING PERSON

I UNDERSTAND YOU IMMEDIATELY

RICHARD FOREMAN: Joel – move your feet more like “what are you doing?”

RICHARD FOREMAN: What is the term human beings used before they started saying “whatever?”

Some good suggestions. None quite match “Whatever.”

STAGE MANAGER: We’re going to keep going from here. The girls are going to stand up and twirl.

LOOPED VOICEOVER: Here is the end of part one-

DIRECTIONS FOR ACTOR JOEL ISRAEL, WHO MUST MIME PRESSING A KEY ON ONE OF THE ODDLY PROPORTIONED GRAND PIANOS THEN COVER HIS EARS AND…I THINK…FEEL THE WORD “WOW” INSIDE HIS HEAD

RICHARD FOREMAN: You’re going too fast; it doesn’t have to be even. (He demonstrates. Joel repeats.) Cover your ears; feel the vibration…. I think it would be closer to your ears… make head phones for yourself…(Demonstrates.) I think it’s impossible to do “wow” without opening your mouth a little….And then…when the thuds come (SOUND CUE OF THUDS) all beauty comes to tragedy”

Juliana acted in Foreman’s PARADISE HOTEL; BAD BOY NIETZSCHE!; MARIA DEL BOSCO; and KING COWBOY RUFUS RULES THE UNIVERSE. She is currently on tour with Young Jean Lee’s SONGS OF THE DRAGONS FLYING TO HEAVEN (next stops: Berlin, Brussels, and Seattle) and can be seen in Marie Losier’s film, MANUELLE LABOR (created in collaboration with Guy Maddin) in Brussels, Paris, Stockholm, Montreal, Cairo, Lausanne, and Columbus.
Posted by Ontological-Hysteric Theater at 11:13 AM