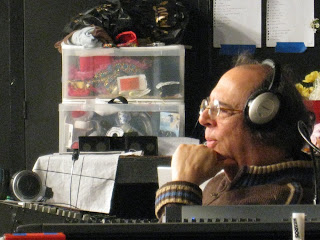 There's LOTS of information out there about Richard in interviews and essays and so forth. They cover the clever, theoretical, artistically relevant, conceptual questions around the maestro. Here's some tidbits those interviews might not mention...

He has an alter-ego named Norman Foreman.

Did I mention he’s funny?

Richard is generous with the younger artists he knows who work around him.

He takes scissors and cuts material off costumes as the actors are wearing them. Sometimes he sits in his chair and says, “Come here.” Sometimes he just walks onto the stage and cuts.

During breaks he will quietly pick up gaff tape, walk onto the set and start taping stripes and x’s.

Richard hears everything we say, even if he doesn’t respond or seem to notice. He notices.

He watches one daytime soap opera.

During rehearsals, he will lift one finger in front of his eyes and wiggle it back and forth while he watches a performer. We have no idea why.

Funny. Right, I said that.

When you are in the rehearsal process, he’d like you to be immersed in it.

More than half the cast and crew began working with Richard as interns. No matter where you come from, what you do, or how long you've done it, if you want to work with Richard, interning is good. He notices.

He eats homemade sandwiches for lunch.

I’ve never seen him drink anything.

Richard knows all about hot glue.

If something doesn’t look right, he’ll take a pen, walk onto the set and start writing on the walls. Then he'll start changing the lights (see video)

Every once in a while, he will nap during the lunch break. Usually he sits in his black office chair and looks at the set.

Richard wears a headset instead of the special earplugs the rest of us use during rehearsals. Yesterday he broke one side off because...something about it not working with his glasses.

When inspired, he tells great stories.

Posted by Ontological-Hysteric Theater at 1:20 PM