On Magic, Esoteric Knowledge and Transmutation 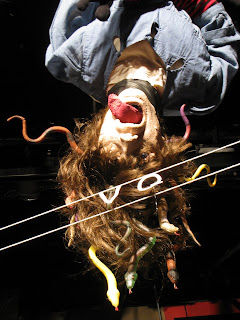 I've been interested in the subject of magic ever since I was in high school, when I befriended a local intellectual/tormented genius/magician. It never became a subject that I studied too seriously. The scattered sacred texts I was able to get my hands on were always fascinating to read, but ultimately too esoteric for my intellect to obtain. I have a problem with holding on to certain kinds arcane knowledge, and thus have a difficult time when it comes to discussing such topics with other "intellectuals." I don't easily retain the specific names or terminology that is needed for fluent discourse. But nevertheless, I don't let it deter me from making an attempt.

Indeed, I did lose interest in magic after that friendship ended after high school, and I moved away to college. It wasn't until I found myself working on the production of Foreman/Zorn's Astronome: A Night at the Opera that my interest in magic resurfaced. The reason being, perhaps, because it was the first time in my life that I actually witnessed real magic.
I would liken Foreman's process of creating a play to the practice of alchemy, in that he takes raw material and transforms them into gold and precious jewels. It is a long process, and you must first create a lot of lousy theatre to get to a pure and valuable product.
The product Foreman has transmutated this season is Astronome. The play is littered with magical and mystical symbols, incantations, rituals, and dark poetry. The first 2 and a half months of rehearsal I was seeing the play as a sort of ritual, a dark and sinister ceremony. I knew it was about magic, but I hardly expected it to actually be magic.
Then I stumbled upon the Church of Satan on the internet, and I was surprised (though, not really) to find some rather uncanny resemblances between Foreman's play and the Satanic ritual of Black Mass. I wrote a short piece on my blog drawing parallels between Astronome's ritualistic aspects, and The Church of Satan's theatrical aspects. You can read it here.
Then I started to read a bit into the Key of Solomon, which has to deal with Kabbalistic magic, and Western Hermetic practices. (There is an online text here.) And I started to wonder if Foreman himself has a working knowledge of all this, or if he is just working from some genius intuition. Richard said the other day that he was unsure as to whether John Zorn was even aware of the magic present in his composition. So then maybe they are both intuitive geniuses, and their magic comes purely by coincidence. Either way, Richard surely recognized the magic inherent in Zorn's Astronome and ran with it. And though he is certainly not practicing any form of orthodox magic that I know of; with Astronome, Foreman has succeeded in creating a real ceremony of serious magic. I just hope he understands the responsibility of the power he possesses.
_____________________
Before I sign off, I also wanted to share briefly my experience of last night's run through. There was something  that happened that changed my whole outlook of the play. I noticed a very small yet very drastic change in the actors' gaze.
This gaze suddenly gave a whole new tone to the play and to the characters that inhabit it. It also completely transformed the whole locality of the play for me, transporting me to another world. Where I used to see a group of actors performing a ritual in this world, I now see bizare group of underworldings who inhabit some sinister underworld or afterlife.
This new place that has been created is quite real, and quite frightening. What I saw in the characters eyes was a sense of real fear, something dark, a sinister stare. I suddenly realized that these characters where not of their own free will. They are being watched, made to perform, like puppets, strange gestures and bizare rituals: perhaps for eternity. They know they are being watched, you can see it in their eyes. They move with extreme caution, as to not miss a step, so the watcher doesn't notice anything out of the ordinary. This is a dangerous and anxiety ridden world they inhabit.
During last night's run trough, I was so much more affected by, and aware of, multiple layers of psychological associations in the play. I can honestly say that my experience was one of brief existential anxiety (until of course a bright light shone in my eye, thus denying me permission to fully fulfill my immediate desire, which was to contemplate a green light hanging in the corner of the stage).
It is what attracted me to Foreman's theater in the first place: this sense of playing to the audiences psyche rather than to their intellect. It is something that I couldn't really know until I experienced it first hand.
I just glad that the frustration of working through Foreman's relentless experimentations actually payed off: not that i had any doubts. But what 2 months ago I saw as a a process with no logic or reason; I now see as an intuitive ceremony that yields a wealth of esoteric knowledge.
If anything in Foreman's plays "make sense" it isn't because you can apply an intellectualized set of logic to it; but rather, it just "feels right (or wrong)." Foreman presents this very idea in a line of poetry "spoken" in Astronome: "The power of the message, is simply, to engender the thing with that message itself." This is, I think, definitely at the core of Foreman's technique.
Ian Picco in Ontological Fez, gold hoops, and makeshift monocle. 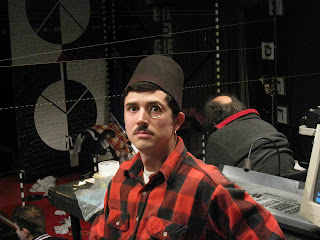 Posted by Ontological-Hysteric Theater at 5:38 PM

Excellent.
It's funny...you can leave "tormented" out these days...replace it with "life affirming" even...and that's a wonderful, wonderful thing.