The Set, Then and Now 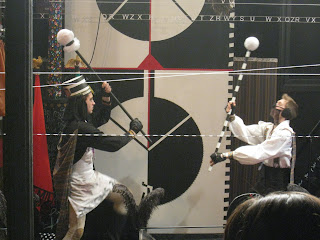 Richard has been lauded across disciplines as a master of design, sound, movement and, of course, theater. The set, props and costumes are his creations, his vision.

It takes 10 interns, the props mistress, technical director and stage manager two full weeks to build the initial set, create the initial props and assemble the inital costumes. That adds up to roughly 910+ hours of building, painting, gluing, errand running, sawing, stapling, sewing, drilling...and activities I don't know words to describe (these ARE Formanized objects.) Then rehearsals start and all bets are off.

Over the next three months, everything goes through changes. Feathers, jewels, string, papers, a double dildo, blocks, multiple cacti and baby legs (off the top of my head) have come and gone. Props are built, added, and cut. The set is painted, written on, repainted, rewritten on, and then covered in material. The 10 foot snake (I sewed it myself) had a simple head, then a head with a tiara, then a head with a tiara and a snake in the mouth, then a head with a tiara and a baby in the mouth, then simply a head with a tiara. Karl started in a Prince Valiant wig, went to a Brunhilda wig, then to his own hair slicked down and parted in the middle, then to a hat. The hat has been through at least five incarnations involving gold paint, black gaff tape, two different rubber snake heads, and a piece of black cloth hot glued to the back. Richard seemed to develop an odd need to spend long periods of time with Karl's hat. "Come here," he'd beckon with his finger. Karl would walk over, hand his hat over, and we'd sit while Richard applied concentric circles of tape. Rehearsal would begin again, and Richard would say, "No, it isn't right." And Karl dutifully walked over and relinquished the hat.

Less than two weeks before opening, the trademark plexi and string that separates the audience from the performers came down in 10 minutes of screwdrivers, lug wrenches and a pair of scissors. It was called, "Richard Goes Radical." He said, 'In the next lecture I do, I think it will be called, How to Make Theater Without String.' " Everyone - performers, interns, stage manager and audio engineer were, to use our term, "completely freaked out" by the sudden openness. "This is like theater," someone said.

Attached are some photos chronicling the changes in costumes, props and set design. I wish I could show you everything. These photos show less than a fraction of what has happened. 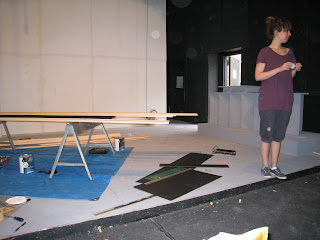 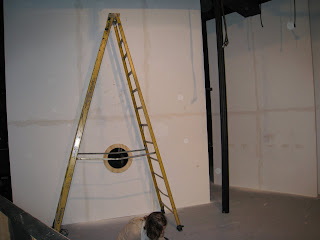 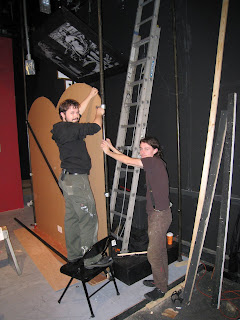 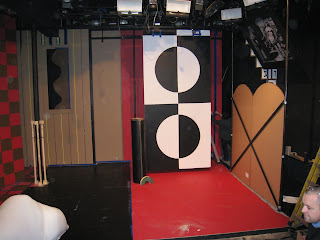 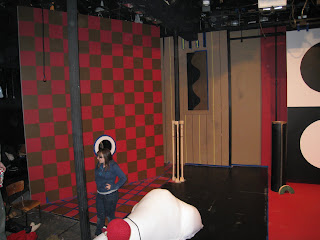 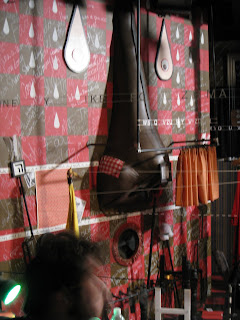 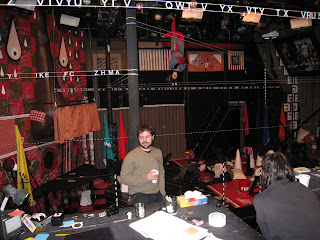 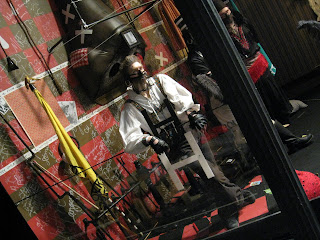 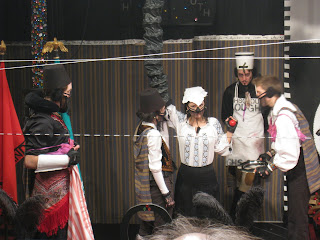 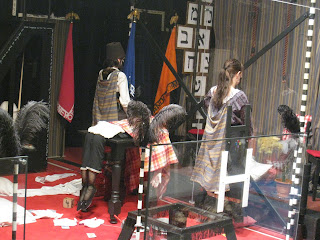 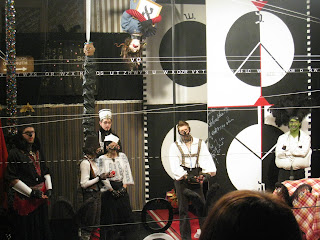 Posted by Ontological-Hysteric Theater at 12:55 AM